Color Outside the Lines with Out Of Line Wine

Color Outside the Lines with Out Of Line Wine

By Rachel Green
Do you ever walk in circles through the aisles of your go-to liquor store while you're on the hunt for a new wine? There isn't much that can set the sea of bottles apart besides maybe the label's choice of description or maybe a creative logo.

University of Missouri student Corey Reuter had the same thought and wanted to create a standout wine that people would notice. President of the recently released Out of Line Wine, Reuter is a Columbia native and Biomedical Engineering student with a passion for entrepreneurship.

The idea for Out of Line started with the idea that wine should be more interesting than just its contents. As you may be able to tell by the label, it came about at the time when coloring books were beginning to grow in popularity. 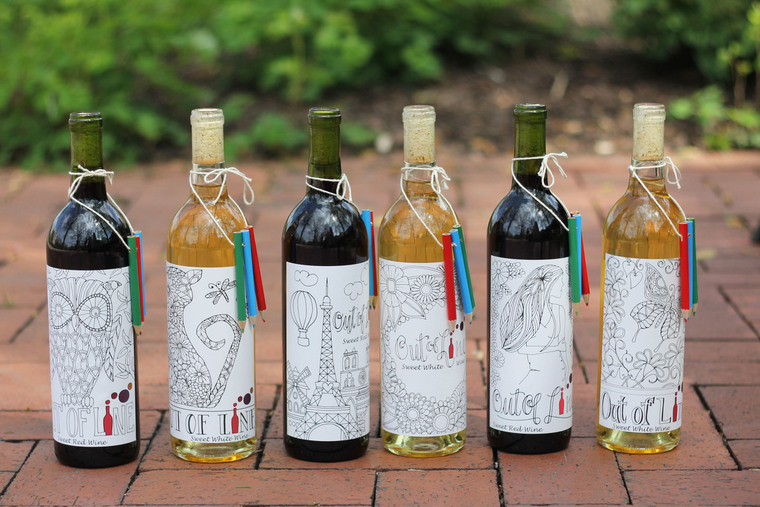 Reuter is a fan of the popular wine, 19 Crimes. Known for having the 19 actual crimes that each of the notable men on the label committed listed individually on each cork, it gives customers an incentive to pop open a bottle and find out what crime is inside. This intrigue, as well as the growing adult coloring book popularity, drove Reuter to start his own business.

Reuter was spending a relatively unexciting summer in Columbia and got the idea to start his own label. He began by taking a wine bottle, a large UPS label with an image of a coloring book page and some colored pencils. He tediously drilled holes in the pencils and put together a mockup of his product. After asking friends for feedback, he decided it would be worth it to start with an order of 60 cases and try to sell the wine locally.

However, after the mockup, a small and kind of humorous roadblock occurred upon beginning the production of those 720 actual bottles.

After some research, Reuter found a wholesaler to take care of that for him.

'It took a bit of negotiating and explaining as to why I wanted holes in all of my pencils but luckily, they did it for me."

For the labels, Reuter searched the internet for what he pictured his final bottles looking like and after sifting through thousands of Google images, he found California-based designer, Judy Clement Wall. She has created many of her own coloring books, postcards and more in her Etsy store and was the perfect person to create one-of-a-kind designs for the labels and make the things Reuther pictured become a reality.

As for the wine itself, there is a red blend and a white blend available. The wine is made my nearby and local favorite winery, Les Bourgeois Vineyards. 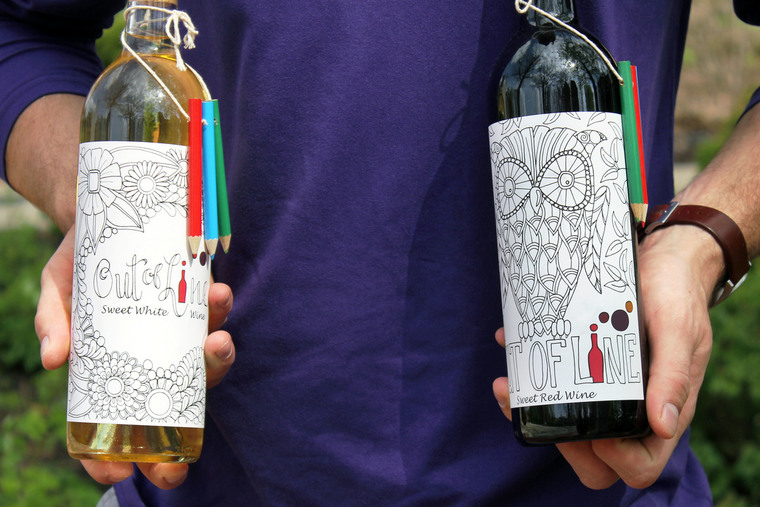 "I was able to test a variety of blends and I settled on these two," says Reuter. "I'm the only one that has these two in Missouri so it's not like you're buying a Les Bourgeois wine. It's not a hiked up Riverboat Red or anything. It's its own unique blend."

Out of Line Wine is currently being sold at Hy-Vee, Macadoodles, Hitt St. Mini Mart (best known as No Gas), Moser's and will hit Arena Liquors this week.

The wine has been available in stores for three weeks and is doing quite well. Reuter hopes the success will continue and is glad he took a shot at something different.

"I'd rather look back at 50 and remember that one time I started a wine label than always wonder what it could have been, ya know?" says Reuter. "I'm happy with it."