The classic burger: it’s American as baseball and apple pie, a beloved backyard barbeque staple and the backbone of the fast food industry. What makes a burger good depends entirely on the taste and preferences of the person eating it. The best thing about a burger is that it’s almost totally customizable. You can choose toppings, mix meats, go bunless and more to make each meal truly your own. With so many options, the idea of a top burger is justification for debate.

That’s exactly what happened in one friend group in Columbia. In mid-June, Ryan Stoll texted his group of buddies that Mad Cow has the best burger in CoMo. The guys were outraged - each ready to champion for their own burger of choice. The debate could have descended into absolute chaos as each friend claimed that no, really this burger is THE best and secretly wondered if the others were born without taste buds. The group was left with only one logical choice: they needed to form their own Food Network-style judging panel and try different burgers around town.

What is a Burger?

If someone asked you “what’s a burger?” you’d likely have a pretty simple answer. It would probably be along the lines of a piece of flattened meat between two buns. But when you ask the men of #BurgerThursday what qualifies as a burger, be prepared for enthusiastic discourse.

David Cover cited the Oxford dictionary definition of a burger as a starting point: “ground beef between two pieces of bread.” Seems simple... until you bring up the Great Sycamore Meatloaf Burger Debacle. Is a patty made from meatloaf still a hamburger? What about 44 Canteen’s Korean burger that is 60 percent beef and 40 percent pork? Is a patty melt a burger? Should a well done burger count in the judging? These are just a few of the ongoing debates amongst #BurgerThursday. Ultimately, the group has decided to let the restaurant decide what it considers a burger. 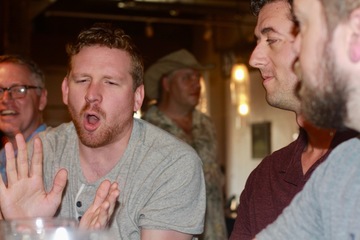 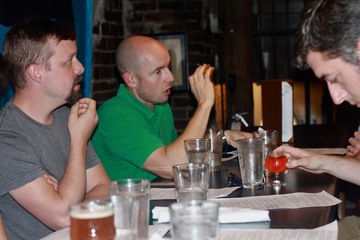 The group travels around Columbia to both local restaurants as well as chains; visiting burger joints and general restaurants, alike. The first stop for #BurgerThursday was Just Jeff’s. As of late August, Just Jeff’s still has one of the highest ratings for their classic burger. The rating scale has further been defined to include three separate judging categories. Up to four points can be awarded for the patty; up to three points for the bun and up to three points for the toppings for a total of 10 possible points. A separate fries rating has been added, and includes up to five points.

Along for the Ride

I joined the group in August for their trip to 44 Canteen in downtown Columbia. We met at 11:45 and six of the usual seven members were able to make it. Each of the men ordered whichever burger they found most appealing, choose their respective toppings and listed a preferred doneness. The group likes to joke that between the seven of them, they have over 130 years of eating experience. If they ever made t-shirts, I’d like to think that’d be the slogan. When asked about why they get together each week, the responses included how #BurgerThursday is an excuse to argue and get together; and how each member of the group shares a passion for Columbia and for food. 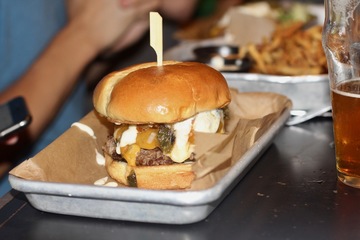 The cantankerous group made jokes, caught up and told stories for about 10 minutes. Once the food arrived, however, the group went silent. Unspoken rule of #BurgerThursday? There’s to be no talking while eating because they don’t want to influence each other’s rating. 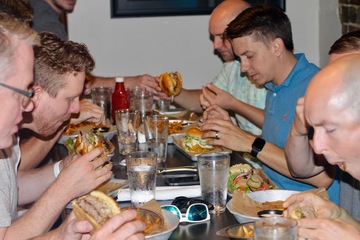 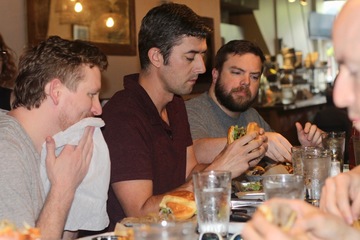 After a few minutes, the evaluations began. Each member gave their respective burger a score out of 10, and gave their fries a score out of five. Cover, the group’s assumed historian, recorded each answer on his phone, and calculated an average. The consensus for 44 Canteen? An 8.2, which translates to a strong burger choice!

So what’s next for #BurgerThursday? The group hopes to try Sake and Cherry Street Wine Cellar; and even talk about expanding their scope beyond just Columbia.