Bubbly. Booch. That weird vinegery stuff. Kombucha. Whatever you call the trendy probiotic tea, you’ve probably seen it adorning shelves at luxury food stores and crunchy granola spots, included on funky cocktail menus, or lauded by health bloggers on their far-too-intimate Instagram stories. Whether you drink a bottle a day or are terrified by the thought of your beverage being aliiiiive (*cue Frankenstein voice*), there’s no doubt that booch is all the rage nowadays.

Just like coffee, tea, beer and wine, there’s a whole wealth of information to gather about this beverage. In the case of kombucha, much of this deals with the mysterious process of fermentation, which gives kombucha its characteristic effervescence, fills it with probiotics and places it in a category of foods and drinks that are deemed gut-friendly.

That all sounds great; but what is fermentation, exactly? Simply put, fermentation is a process that occurs when bacteria, yeasts and other microorganisms are introduced to a substance, converting natural sugars into carbon dioxide, acid and trace amounts of alcohol. Though purposefully introducing bacteria into a substance for consumption may sound suspicious, you probably have fermented foods in your fridge right this very moment. Gasp!

That’s right. If you have yogurt, miso, vanilla extract, sauerkraut or kimchi adorning your shelves, you’re already firmly aboard the fermentation train. All of these foods have thousands of healthy bacteria in them that will fortify your digestive system and boost your immunity. The fermentation process does vary product to product, however, so let’s look at what really goes into mixing up a homemade batch of booch.

Making kombucha requires black tea bags, sugar, lots o’ water, brewed kombucha tea (you can buy this at your local grocery store!) and SCOBY, or the “mother” of this witchy brew. SCOBY stands for symbiotic culture of bacteria and yeast–scary name, important job. Firstly, the water is boiled, poured into a large bowl and used to dissolve the sugar. The black tea bags are added and allowed to brew until the mixture has cooled. The tea is then poured into a glass vessel and the previously brewed kombucha tea and SCOBY are added. Once this step is completed, the jar is covered with gauze, cheesecloth or a tea towel and secured tightly. 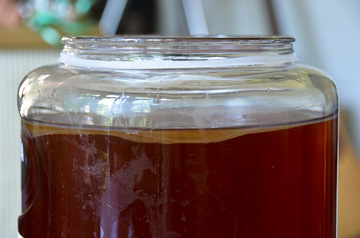 The first round of fermentation then begins by storing the starter booch in a cool, dark place for about 7-10 days. After this period is over, the kombucha is transferred to smaller glass bottles and allowed to sit at room temperature for another three days in order to undergo a second cycle of fermentation. 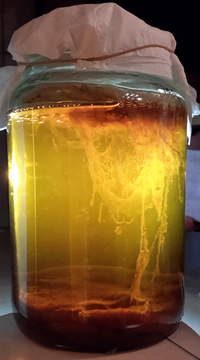 These two distinct stages of bottling and fermenting are essential to the kombucha process; as the shorter, second fermentation endows the drink with its exciting fizziness. This is also the stage in which herbs, fruits and other flavorful goodies are added. After three-ish days spent hanging out at room temperature, the finished kombucha is strained to remove bits of whatever flavor-inducing items were added. At this point, the booch is popped in the fridge and is ready for chugging, mixing or Instagramming.

Check out a video like this one this if you’re interested in trying out fermentation for yourself, but if the process outlined above seems like a lot of work, don’t fret! Columbia is lucky enough to have a booch-bearing locale in the heart of downtown, so you don’t have to make home brews if it doesn’t suit your fancy. DrinKraft is located in the North Arts District, near Rose Music Hall and Café Berlin. Boasting over fifteen flavors of kombucha on tap, this spot is a great way to taste the delicious things fermentation can do. From Lemon Mango to Rosemary Beet, Watermelon Citrus or Hibiscus Chili, DrinKraft’s creative concoctions are sure to make you a bit more comfortable with exploring flavors and treating your gut with the respect it deserves.

Whether or not you choose to foray into the world of fermentation at home, do not be afraid of bacteria! Rather, embrace the bubbles and welcome the probiotic power of these awesome microorganisms. Now you can pull up a stool at DrinKraft or grab a bottle of store-bought booch feeling a bit more educated about what you’re actually putting into your body. 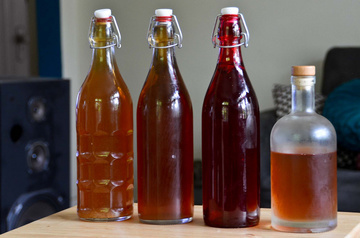