Disclaimer: A separate day from national blueberry muffin day, which is in July.

The never-ending list of National Food Holidays provides us with not only something to look forward to, but also gives us a reason to indulge in our favorite foods. If you don’t look forward to the traditional American holidays, like Halloween or New Years, here is one we can all get excited for: National Muffin Day. Cousin to the cupcake, frequently mis-labeled as a dessert (but still extremely tasty), this baked good has earned its own day of the year. The muffin is so well-loved and adored, it is even used as a term of endearment in society. Take February 20th to give muffins the credit they deserve. Share one with a friend, give one to your boss, or buy a box for yourself. If you are planning to observe this holiday, make sure to buy from the local bakeries and coffee shops in Columbia, Mo.

A Brief History of the Muffin 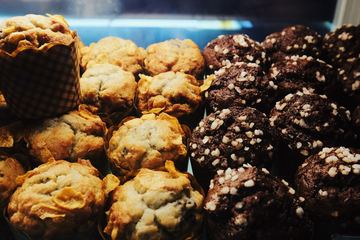 Bread or pastry? The word muffin derives from the French word mouflett, meaning a soft bread (a very literal translation on the French’s part). Although the muffin can be sweet or savory, it is technically a bread. As muffin recipes broke the press in the early 1800s, it wasn’t until later in the 19th century they became the popular food item we know them to be today. The nursery rhyme “muffin man” has its roots in a very real and very well liked group called the muffin men. These traveresers would ring their bells in the streets during tea-time to let people know they had muffins to sell. An Act of Parliament in the 1840s unsuccessfully tried to ban the muffin men’s ringing of the bells. The legacy of the muffin men continues to thrive as there is even a 90’s band from Liverpool named in their honor. Today we have limitless options on muffin flavor variety, allowing them to be enjoyed at any time of day.

Pay homage to the muffin on February 20th and buy local!